Here is a hypothetical scenario (that I ran into last month)   Take a guess on which options are more environmentally friendly.  This is not as easy as you think.

You have an old patio deck that is 10-15 years old made of pressure treated wood.  The stain is almost completely gone, and the wood has splintered in many areas and in rough shape. You think the deck is at the end of life, but you are not sure. 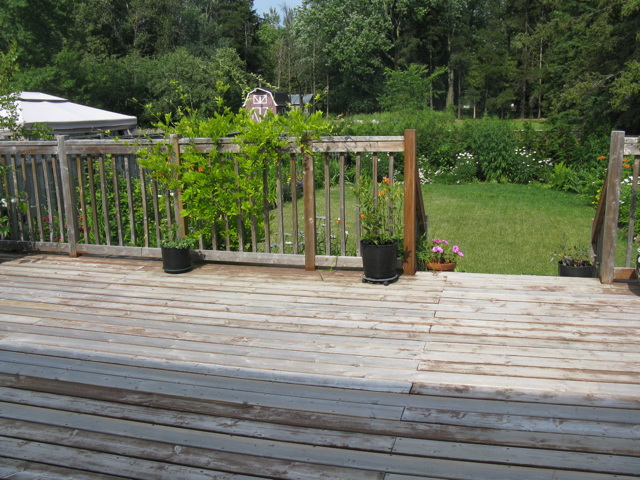 Here are your options for the plan of action.

There are other options of course, but lets stick with these two for the time being.

It depends, but probably #1,

but most likely not for the reason you think!

The reason why #1 is probably a better choice is because prior to 2004, pressure treated wood was “treated” using chromium and arsenic.  The wood is called Chromated Copper Aresenate (CCA) pressure treated.  Yep, companies actually put carcinogens in our decks if you can believe it, until it was banned in residential use in Canada and the US.  Side note: it is still used in telephone/hydro poles today in new installations.  Today, the residential sector mostly uses Alkaline Copper Quaternary (ACQ) or less common  Copper Azole pressure treated, which is far less carciogenic, but also has it’s caveats which I will not discuss in this article.  Its also the stuff that’s now available at the big box stores.   You may have read about CCA  in the news about ten years ago about this stuff being used in playground equipment in public schools.  Ring a bell?  There is a website devoted to this stuff noccawood.ca though slightly out of date, it still has good articles.

My first gut feeling for this answer is to prolong the life of the deck, to reduce the amount of waste that ends up in the landfills by staining the deck.   Of course that deck will eventually be land-filled, but you are consuming less by protecting what you have now.  It’s like buying a new car ever three years when a lease expires.  Granted, someone else does use that car after three years, but no one will use your deck after you throw it out to the landfill.

The environmental issue here is, to properly stain a deck, you need to pressure wash it (or sand it).  If someone came in to pressure wash that deck, some of the chemicals are still encapsulated in the wood, but not nearly as much as when it was new.  The pressure washing could scatter some of those chemicals out of the wood.  The amount is not much, but I still would never recommend doing that.  Contained environmentally friendly items are always safer than uncontained.  Also, the soil directly under the deck is the area that will have the most chemicals in it.  When the deck is eventually removed, it must be done so with great caution, and the deck itself has no possible second use, and it’s life cycle ends.  It must go to the dump as the chromium and arsenic cannot be extracted from the wood, and cannot be buried or burned.

This is a similar concept as Green Houses Gases (GHG) in that carbon dioxide is trapped or stored in vegetation, and is released into the air when burned.  The pressure treated deck stores in the carcinogenic chromium and arsenic, it is safer to have it trapped in the wood, than all over your lawn.  Most likely you will have the highest rating in the soil within two feet beside of an installed CCA pressure treated deck (or under it).   If you had this done in the past don’t freak out, if you had a good installer, they may have been extra careful, and you are probably fine.  If you are skeptical, get the soil tested.  You could use an environmental testing company.

I guarantee you that not every decking company will take great caution when repairing or removing.  Make sure they don’t use their saws to remove the old wood spewing sawdust in the air with this stuff.  When you hire that deck company ask them what their removal procedures are, and keep in mind that the soil underneath the deck is probably contaminated.  Do your research.

It doesn’t matter that scenario #1 has the recycled content, it is not nearly as important as the handling and disposal of the old deck from an environmental standpoint in this particular scenario.  This of course is a tad oversimplified, but it is important to know that performing the most environmentally friendly action in home renovations does not always carry labels or bragging rights with it (if that is important to you).

Here is a new question… If you get a new deck, is option #1 or new style ACQ pressure treated more environmentally friendly?  The answer is as always “it depends”.